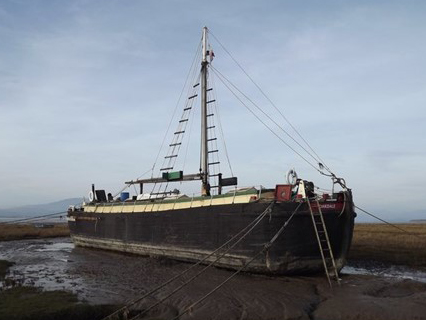 Mersey Flats were a very localised style of vessel and were once built across the region; along the Mersey, Weaver, and other local rivers and canals, and along the North West coast from Anglesey to southern Scotland. Only two now survive; Mossdale, built in Chester but later bought and refitted by Abel’s of Runcorn is in the hands of the Boat Museum at Ellesmere Port; and Oakdale, beached at Askam-in-Furness which was once used as a houseboat by her owner and restorer, Dave Keenan.  The last remaining Composite Mersey Flat, Oakdale is also the last-known surviving commercial sea-going vessel built in Runcorn.  Dave is a man with vast experience and knowledge of local maritime affairs (having worked in the coastal trade for many years) and clearly loves the Oakdale, realising her unique status.

This has warranted her inclusion on the National Historic Ships Register
(https://www.nationalhistoricships.org.uk/register/2024/oakdale).

However, the work is beyond Dave’s ability to achieve on his own and a new group has been set-up to ensure the vessel can be fully restored. The Oakdale Mersey Flat Trust has been set-up by Roger Murray, Martin Dewhurst and others. They aim to fully restore her and then, once safe to be towed, to return her to the Mersey, hopefully to her birthplace of Runcorn.  Ultimately, they hope to found a heritage boatyard at the site of Oakdale’s launch at Castlerock. Or further along Runcorn Waterfront at the site of the former Town Slip, beside the new housing development where Old Quay Yard once maintained the vessels of the Manchester Ship Canal.

Bob Ratcliffe, who founded the original Mersey Oakdale Refit Society (MORS) some years ago, to establish interest in, and support for, the flat is a LNRS member and has been asked to join the new team.

The most modern Flats were composite built, so therefore had steel frames and wooden planking.  Later developments led to the invention of motor-engined ‘Weaver Packets’.  In much the same way that we can consider the Weaver Packet as the most modern development of a Mersey Flat, the design being taken to its natural conclusion in those motor vessels, Oakdale represents the very same level of development along the traditional sailing line and is therefore a vessel of great historical importance.  Furthermore, she is one of only five surviving composite vessels in the world (alongside the City of Adelaide in Sydney, the Cutty Sark in London, HMS Gannet in Chatham, and the beached remains of the Ambassador in Chile), making her a craft of international significance.

She was the second-to-last Flat ever constructed and was launched at the Castlerock Yard of Richard Abel & Sons, having been built to the same designs that the firm used back into the 1850s for the many vessels they created for themselves and for other concerns.  She is a sister-ship of the last ever flat, the Ruth Bate, which has already, sadly, been scrapped.  Oakdale has a rudder that appears to be from an older vessel, as evidenced by it having a rounded top with a decorative notch carved into it which they stopped doing after the 1890s.

According to Michael Stammers, in his ‘Building Flats at Runcorn’ from Waterways Journal Vol. 5, this and the Ruth Bate were built “to the same design which is considerably different in shape to the traditional form” being for example, “almost as square in the bow as the Humber Keels”.  They were designed by Mr. Albert Andrews, the manager of the yard, and he “incorporated a great deal of steel into the framing”.  There were three steel keelsons instead of the usual one on the centreline, as this reduced the amount of the hold taken up by large timber pieces used traditionally.  Straight side frames were rolled from steel and the framing timbers at the bow and stern were “fashioned in the traditional way” (iron frames running the length of her parallel body and wood frames from the forward and aft bulkheads).  Additionally, the hatch coamings were of steel, instead of the traditional timber.  There is a greenheart bottom and from the turn of the bilges to deck level she is of oak, with her decks of Oregon pine.  All of this gave this vessel great strength.

In 1929 materials were bought by Abel to build five Flats, but then came the Great Depression and such plans were shelved for the time being.  They built Fred Abel in 1936 (named after Frederica Abel, mother of the owner) and then World War Two interrupted expansion plans again.  By the end of the war a steel shortage delayed the next vessel and hence Oakdale was not started until 1949 and eventually launched on 15th September 1951 after an 18 month build (with 1930s-built frames).  The remaining vessels were Heathdale and Ruth Bate, with the fate of the last set of frames being a mystery.

Oakdale was built for the company’s own use and worked for Abels until 1963 when they ceased trading.  She was sold to Rea who later sold her on in 1966.  She was then sold to a man who wished to make her into a floating restaurant, but the plans fell through, and Dave Keenan bought her when she was lying in deep mud at Burscough near the pub whose landlord was trying to open her as an eatery.  Dave took her to Brunswick Dock in Liverpool and went about the surviving barge companies to buy the necessary spares before refitting her at the Bootle Barge Company.

Her current owner has converted her hold and fitted an engine and a small mast capable of carrying a Gaff Mainsail and Jib.  The mast was a topmast from a Dutch ship de-masted at Eastham for her onward voyage to Manchester (as is customary for vessels with high masts) during World War Two.  The ship for some reason never left that port and the topmast was left beside a Lockmaster’s building (at Walton Lock possibly).  It was later rescued by a friend and given to Dave.  The tabernacle comes from a trawler.  The anchor comes from an old Bates boat and the windlass was recovered from an old yacht.

This vessel is critically in need of volunteers to help maintain her.  Any help in preserving this vessel would be an aid to keeping alive a very important facet of national and international shipping heritage.

Once we get this done, and consider the move back to Mersey, volunteers will be needed to operate the heritage yard, and to act as hosts for visitors.  We also need people to come forward with stories and reminiscences of the old yards and their working craft.